If you intend to stay in a marina for the rest of your life and not go day sailing or cruising, you might not even need an engine.

You can find real good deals on boats without engines.

Liveaboard boat propulsion won't be an issue for you if you don't have an engine.  Believe it or not, some people make the decision to go without one.

For example,Lin and Larry Pardey are famous sailors who have sailed around the world many times and just about every place in between.  They have never had an engine on their boats, and love the extra storage space it gives them and the peace of mind that comes from not having to worry about an expensive piece of equipment.

If you're like most of us, however, you'd like to be able to take the boat out now and then and get a change of scenery.

Here are some considerations for liveaboard boat propulsion.

Diesel engines are heavy, rugged, long lasting and economical.  Diesel fuel is less likely to catch fire or explode than gasoline.  It is fairly easy for the amateur to learn how to maintain a diesel engine.

As an example of diesel economy, my Island Packet 26 displaced 8,000 pounds and was powered by an 18 horsepower Yanmar diesel engine.  Fuel consumption at cruising speed of about 6 mph was 0.4 gallons per hour.

Inboard gas engines still give you the most horsepower per pound and are great for boats that want to go fast.  A boat going fast with a gas engine, however, is going to burn a lot of fuel.  Gas fumes accumulating in the bilge are a danger that one constantly has to be aware of.

Outboard gas engines are also loaded with power per pound, and have the advantage of being easier to work on than most gas or diesel engines tucked away in a cramped engine compartment.  The danger from fire is much less because the engine is automatically well ventilated.

Electric power for boats is still suffering from the same problem as electric cars:  their range is too short.  They do have some virtues, however.

To me, the ideal engine for a marina liveaboard would be electric.  There are not many boats - yet- powered by electric, but I predict their day is coming.  I think an electric motor for liveaboard boat propulsion might be great for the marina dweller or moored liveaboard who does not plan to do a lot of cruising under power.

If you will be living in a marina, an electric motor would get you out of the marina for some sailing or short trips and would be simplicity itself to maintain.

Inboard electric motors can be installed where the old diesel or gas engine was located.  They can power the same shaft, and other than a big battery bank and electrical modifications shouldn't be too hard to retrofit.

Many companies have been formed in recent years that do electric motor installations, especially for sailboats. 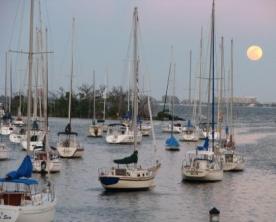 Ever thought of starting a website or blog? I use Solo Build It! to create this website and believe it's the best way to build an online business. Click on the ad to learn more.

Return to Living Aboard Home