Your liveaboard boat systems need to be monitored and kept in good working order.

If you are very handy, you'll save a lot of money doing the work yourself.  If not, you will always be able to find someone around boats who is handy and can help you for a fee.

Here are some of the liveaboard boat systems you might have on your own dream boat.

As discussed earlier, ventilation is important not just for comfort but to keep the air moving and help prevent mold and mildew.  Plenty of opening hatches and ports is the key here.

You can also add a "chimney" to your hatches.  These canvas tubes or chutes can be suspended by a halyard over your open hatch and create an updraft that will help circulate air through your boat.

It's great to have great ventilation in Florida;  it's better than A/C in the cooler months from December through April.

Boats can have a variety of heating systems.  Both of my liveaboard boats had diesel heaters in the main cabin that were piped into the boat's fuel system.

Since I lived in Florida, I removed these heaters and sold them at marine flea markets.  On those few cold days when I needed heat, I had a portable electric floor heater that I bought at WalMart.

It worked fine, and could be stashed away in a locker when not needed.

Some boats have "central" air conditioning with the compressor and air handler tucked away and cold air blown through the boat in ducts.

These systems usually use "raw water" to operate and you can identify these boats by the constant stream of water being discharged overboard when their a/c units are on.

On this kind of liveaboard boat system it is important to keep the raw water filter cleaned of debris that it will pick up from the outside water.

One of my liveaboard boats had a Cruise n Carry portable unit clamped down on the forward hatch.

It was good enough to keep the forward stateroom cool, but didn't have the cooling power to handle the rest of the boat.

On my other boat I built a wooden insert for my companionway hatch.  It was designed to fit a standard window a/c unit that I bought at WalMart for under $100.

It worked like a champ and kept the entire boat as cold as I wanted 24 hours a day.

My electric bill was usually about $30/month during the hot Florida summer months while living aboard in Fort Lauderdale and Miami.  I usually kept the air set at about 80 degrees 24 hours a day.

In more northern climates, even some places in North Florida, winter weather can surprise you with some freezing days.

Those are times you might welcome a nice little wood burning fireplace like the one below from Simpson Lawrence. 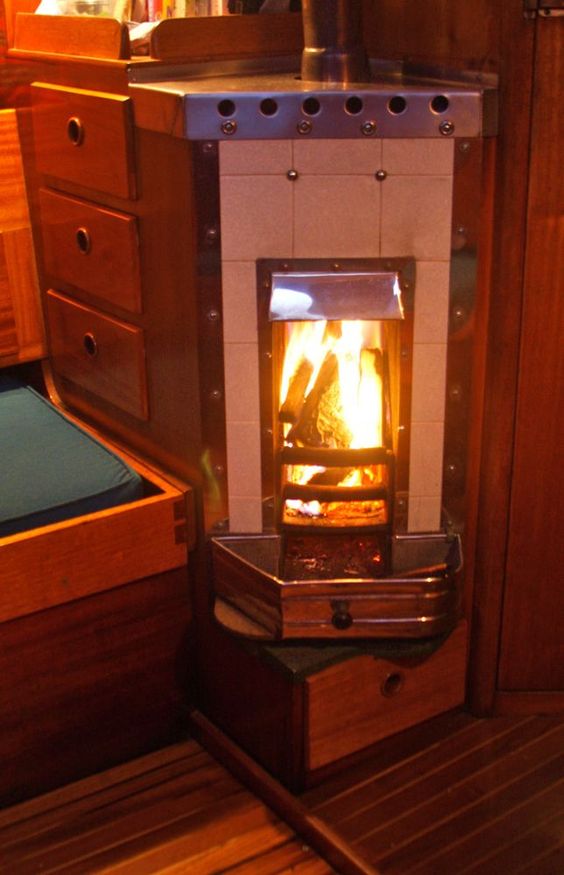 A boat's electrical system is usually a combination of 12 volt direct current systems and 110 volt alternating current for those times when you have access to shore power.

If electrical systems go wrong from corrosion or wear and tear or for any other reason, you can be burned to death in a fire or shocked to death.

This is why I strongly recommend that a marine electrician be used for any major work on your boat's system.  I feel comfortable using my multimeter to check out circuits and make minor repairs.

But where shore power is concerned, I would rather have a licensed electrician install the liveaboard boat systems with the proper circuit breakers, connectors and other safeguards.

Electrical energy can be stored in batteries, but the batteries need to be charged often to keep them good.

An engine alternator will keep them charged when you run the engine.

A battery charger operating on 110 volts AC will keep them topped off while you are hooked up to shore power.

In a marina I rarely use my battery power and take advantage instead of the shore power to light the boat interior, operate the air conditioning and provide power for radio, television, computers and other energy hogs.

When not in a marina, the situation is entirely different.

You can get some energy into your batteries using wind turbines and solar panels, but usually not enough for you to be able to run the batteries through an inverter and get AC power for the same kind of goodies you can enjoy in the marina.

Liveaboards on moorings or the hook learn how to be very stingy in their energy use.

Many interior lighting systems have gone to LED devices (light emitting diodes) because they give you the most light for the least energy.

Liveaboards on the hook still use kerosene lanterns quite often.

These boaters also need to have anchor lights at night in accordance with Coast Guard regulations.

Most boats use every cubic inch of space for storage.  The ingenuity of the designers is amazing.  My sailboats had storage lockers beneath each settee and also behind the settee seat backs.

They also had shelves on both sides of the vee berth compartment and shelves above the settee seat backs.

My Island Packet sailboat had storage shelves hidden by the dining table when it was put upright into its storage position.

My CSY had a dining table that had deep storage lockers in its supporting pedestal that could store your entire liquor cabinet.

Both boats had abundant storage in lockers under the vee berth mattress.  The more stowage the better.

Beware boats that say something like "sleeps 5".  The more berths the less stowage.  In fact, on most boats the extra berths become storage.

If you live on a mooring or on the hook, you can get a "hot spot" from your cell phone provider.  This enables you to get internet through your cell phone.

In a marina, you will find many of them have hot spots you can use for wi-fi connectivity, or you can get a cable tv/internet package right to your slip.

A lot of budget minded liveaboards use an old fashioned antenna they hoist up the mast with a halyard.  If they are lucky, they can get a few non-cable channels and for them that's enough.

Others have boat mounted dishes and pay for a satellite tv service.  Marina living is usually pretty much just like home.   You can have all the amenities if you are willing to pay for them.

I bought one of the earliest flat screen TV's and used it on both boats.  It was very expensive back in those days, and had only a 9 inch screen.

I mounted it on a bulkhead in the main cabin.  It served me very well on both boats and still serves as an extra TV around the house.

In my first liveaboard experience, I had a CD player and hundred's of CD's stored aboard.  The CD's took a lot of room, but the player itself was about the size of a portable radio.

Technology had advanced by my second liveaboard experience, and I bought an Ipod.  I "ripped" all of the CD's off and stored them in the Ipod, and gave the CD's to a friend.

I then bought a Bose Wave Radio and played the Ipod through the radio.  It worked great and saved me a lot of space.

The plumbing system on most boats is fairly simple, but you should know everything about it.

Most boats have a "raw water" system and a fresh water system.

Raw water enters the boat via through hull fittings installed below the waterline.  Raw water is used to cool the engine, flush the toilet, wash dirt off the anchor, wash dishes and a number of other things.

Propane gas is the fuel of choice for many liveaboards because it is cheap, easy to get and contains a lot of energy per pound. Most boaters use it to operate their stove and oven, and that's about it.

The tanks should be stored in a separate locker with vent holes so any gas that leaks from the tank will go overboard and not into the bilge where it could explode. 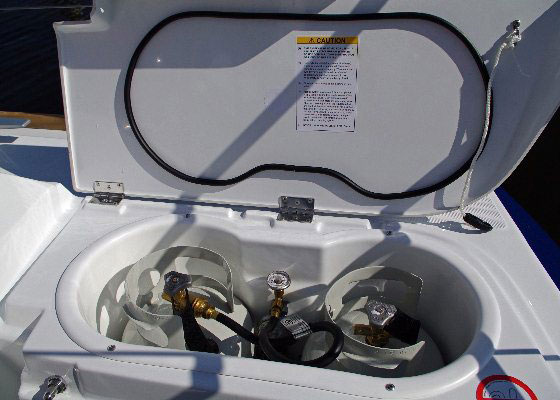 These tanks hold sewage and are unfortunately quite often located under the vee berth not far from where your head rests while you are trying to sleep.

Books have been written on how to keep these tanks from smelling bad.  Some ideas are better than others, but the one I like best is to use the marina restroom when you possibly can.

Fuel tanks can be stashed in various places and conduct fuel by gravity or under pressure to the engine.

You should pay attention to where these tanks are because if one springs a leak you usually have to remove it and replace it.

Water tanks can also be stashed in various places and pipes conduct the water to the galley sink, bathroom sink and shower.

Even if you are using the marina facilities, it's good to keep your tank water moving over.  It will make it smell and taste better.

One of the best little inventions known to mankind is The Tank Tender, manufactured by Hart Systems, Inc.  It allows you to monitor the liquid levels of up to ten tanks with one simple little control panel.

Without a system like this, you will be opening tanks and using a dipstick to measure the levels or opening up hatches and trying to read a tank gauge in the dark. 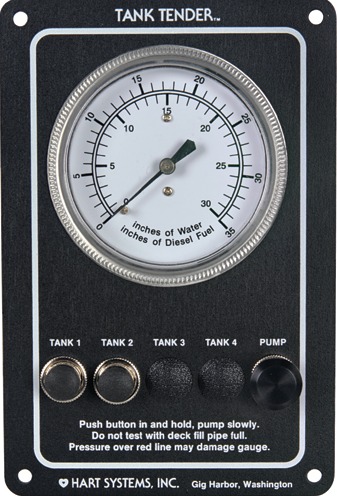 Most boats have both manual pumps and electric pumps to get potable water from the tank to the respective faucet.

Liveaboards on the hook will use the manual pumps a lot to save drain on their batteries.

The photo below shows the galley sink on AWOL.  Notice that in addition to the faucets that turn the electric pump on and off, there is also a pedal at the bottom of the cabinet that operates a manual pump. 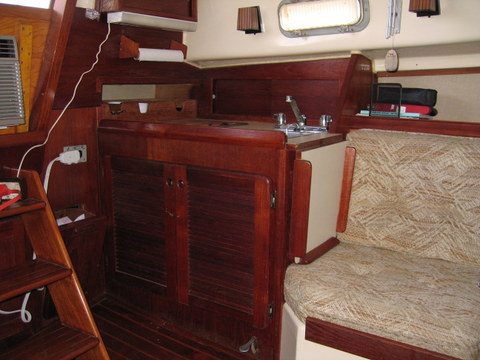 Many boats have a hot water heater, usually a small tank tucked away in the engine compartment.

These systems usually work by circulating engine exhaust water through a jacket that heats up the potable water.  These heaters also work on shore power.

Liveaboards on the hook or a mooring can use a portable flexible water tank that hangs outside during the day and soaks up solar energy to heat water for showers and cooking. 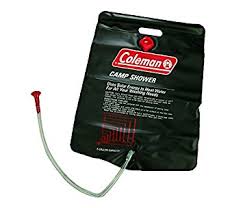 Showering in the cockpit works very well if you are lucky enough to have some privacy.

Some boating and camping stores have portable shower stalls enclosed for privacy.

Return From Liveaboard Boat Systems to
LIVING ABOARD HOME