MORE ABOUT THE DIESEL ENGINE

I prefer a diesel engine for liveaboard boats primarily for safety reasons.  Diesel fuel is a lot less hazardous on a boat than gasoline, and less likely to cause an explosion.

There are some disadvantages, however.  One is that a diesel engine is a lot more expensive to buy.  It is also a lot heavier.

The main components of an engine installation in a liveaboard sailboat are shown in the sketch below.  These components are pretty much the same for both diesel and gas marine engines, and apply also to power boats. 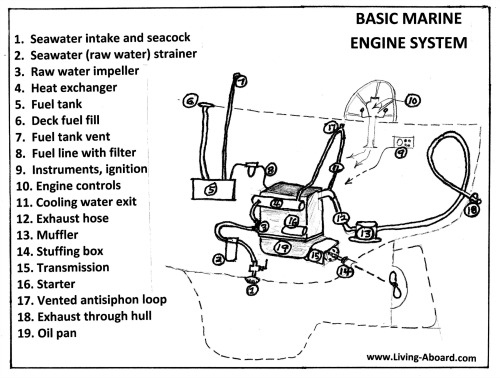 A liveaboard should be familiar with the location of these basic components;  some of them require frequent attention and maintenance.  For example, the raw water strainer should be cleaned and flushed on a regular schedule, like maybe once a week.  Check the fuel tank vent;  in Florida, mud daubers - pesky little hornets - like to plug them up with their nests.  Also, the fuel line filter needs to be checked and replaced on a regular schedule.

There are many books that will help you maintain your marine diesel.  Just start Googling and you will be amazed.

Diesel engines use glow plugs instead of spark plugs.  Earlier model diesels required preheating of these glow plugs prior to starting the engine.  My first liveaboard boat had a Westerbeke diesel dating back to the late 1970s that required preheating.  I had to push on a preheat button for about thirty seconds before I could crank up and start the engine.  I don't ever want that kind of diesel again.

I don't intend to malign all Westerbeke engines, but mine was nothing but trouble from the day I owned the boat, a CSY33.  The main problem was that the boat had been in the Bahamas charter trade for 10 years and was probably not maintained that well.  Shortly after buying the boat, I had to have the diesel engine removed and shipped up north for a rebuild.  After several weeks the engine came back and I had it reinstalled.

Shortly after the rebuild, I started on a cruise and after a couple of hours the engine made sounds like it was falling apart.

It actually was falling apart.

The rebuilder had screwed up and a couple of valves came loose.  I had to have it removed again, sent up north and rebuilt a second time.  Although the second rebuild didn't cost me any money, the rebuilder refused to pay for the additional removal and reinstallation.

My second liveaboard boat, an Island Packet 26MKII,  had a 1980s vintage Yanmar diesel that started easily with a turn of the key. No preheating was required.  Life became simpler and more fun.  That was a great engine and I can't praise it too much.  It ran like a little top, was quiet and economical, and only required minimal maintenance.

Some of the marine engine brand names you will run across in liveaboard boats include Westerbeke, Perkins, Yanmar, John Deere, Cummins, Caterpillar, Universal, Detroit, Kubota, Volvo and many others.

Whatever brand engine comes with the boat you buy, make sure to have it surveyed along with the rest of the boat.  The surveyor should take an oil sample and have it analyzed.

That and his keen eyes and ears might save you a lot of money.

Return From More About Diesel Engines To
LIVEABOARD BOAT PROPULSION

Return To LIVING ABOARD HOME