I started sailing as a twelve year old on Green Bay, the western arm of Lake Michigan where my home town of Menominee is located.

My first boat was a Snipe, the next one a Lightning.

Living aboard was not really my dream back then because the bay was frozen solid usually from December through most of April.  I had not yet learned about warmer climates.

My first experience with living aboard was as a sailor on the destroyer USS Myles C. Fox.

I loved sea duty and got to see quite a bit of the world. 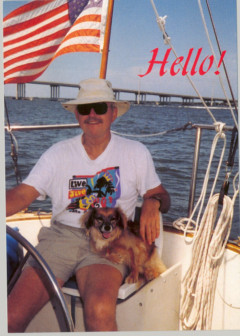 Mike and Sugar Aboard Silverheels

When I moved to Florida as a young man, sailing became a big part of my life.

You can sail 12 months of the year and I did.  After many years, I became a guaranteed annual income for my dermatologist.

I began to want to live aboard, but with a family I was content to spend weekends and vacations on my boats.

After Hurricane Andrew devastated the areas south of Miami,  I was transferred there two weeks later by my company and worked on the rebuilding effort.  There was a huge housing shortage, and the company paid me to live aboard my CSY33,  Silverheels.  I lived at several south Florida marinas.

After that I sold Silverheels and moved to Melbourne, Florida and lived ashore for a time.  Once again my job took me back to South Florida and this time I lived aboard my Island Packet 26MKII,  AWOL,  at various marinas in Fort Lauderdale, Hollywood, Miami and Miami Beach.

AWOL and I finally ended up at Burnt Store Marina south of Punta Gorda, Florida, where I sold her.

For now, I've swallowed the anchor and am living in Mount Dora, Florida.

Return to Living Aboard Home